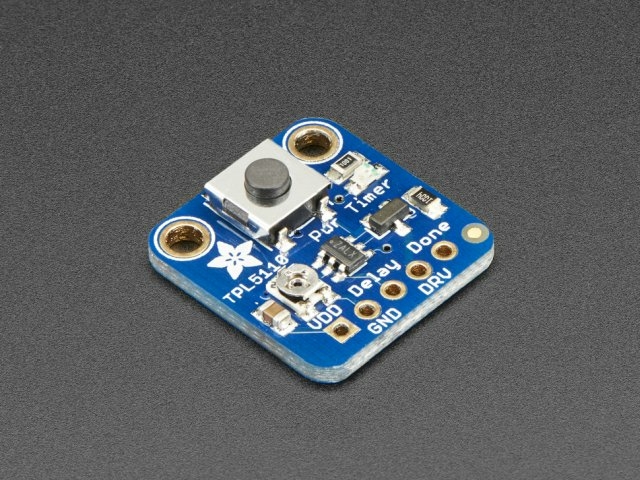 With some development boards, low power usage is an afterthought. Especially when price and usability is the main selling point. So what should you do when it's time to turn around and make that project of yours run on a battery or solar? Sure you could try to hot-air that regulator off, or you could jerry-rig a relay. Or, use a 555? Ugh, the options aren't that great.

The Adafruit TPL5110 Power Timer is a stand-alone breakout that will turn any electronics into low-power electronics! It will take care of turning your project on/off using a built in timer that can vary from once every 100ms up to once every two hours. Basically, the TPL will turn on periodically, adjustable by potentiometer or resistor, and turn on your project's power. It will then wait until a signal is received from the project to tell the TPL that it can safely turn off the power. If the TPL does not receive a signal by the set time-out, it will reset the device like a watchdog timer.

Usage is easy. First, set your desired delay by adjusting the on-board trim pot: nearly-all-the-way-to-the-left is "once per 100ms" and all-the-way-to-the-right is "once every 2 hours". Then, connect VDD up to your 3-5V power supply and then your project's power-in to the Drive pin. Finally, select a signal pin from your project to the Done pin. In your project's code or design, just make sure that it sets the Done pin high once it is completed with its task. That's it!

While the TPL5110 is running (but the remainder of the project is de-powered) the current draw is about 20uA (according to our Monsoon Power Meter).

If you want to turn the device on by hand, you can also activate the TPL by pressing the onboard tactile switch (or wire your own switch to the Delay pin). See? Your power problems just got solved!

While we've used this breakout with Huzzah ESP8266 Feather successfully - other people have said it doesn't work for them. So use with ESP8266 is not guaranteed.

Comes as a fully assembled breakout board with a TPL5110 chip, all components on-board, and some header. A little light soldering is required to put it together for breadboard use.